Ron Swanson at the CJAHS archive?

Today's post will be my last for the semester. However it will not be the last forever. I will continue working at the archive next year after the holidays. Either way, I decided to dedicate this post to a fun discovery we made at the archive.

As I was working on organizing the many hundreds of photos we have in the archive, I can across a large batch of photos from the 1990's. These included photos from community events during the 90's as well as some personal photos from Japanese Americans in Chicago. Although these photos might not be as striking as the ones from the WWII period and the 1800's, they are equally as important to the archive as a means of recoding the activities of the community.

The photos were mostly out of ordered and I had to separate them into different groups based on the content pictured. It was obvious that many of the photos were from the same events so I categorize them as such. Some included information about their donator or origin, so I made sure to keep that information with the groups. I also consulted the President when I could not recognize a person in the photo that she might know. 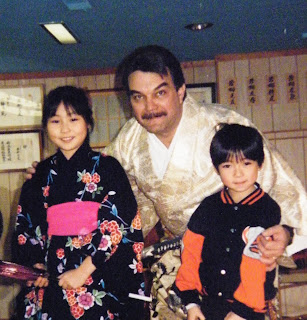 Anyway, as I was going through these I came across a photo of a heavily mustachio'd man pictured in a full traditional Japanese outfit with some kids also in kimono. At first I just started to pile the photo with some others like it, but then I realized that the man looked eerily familiar. Upon a second inspection I realized that the man looked strikingly similar to Nick Offerman, who plays a major role as Ron Swanson on the hit show Parks and Recreation.

As I searched through the collection I found several more with the same Ron Swanson/ Nick Offerman doppelganger. I was shocked. The more I searched, the more ridiculous it seemed. I found a photo of this doppelganger posing outrageously with a topknot wig and fake sword. 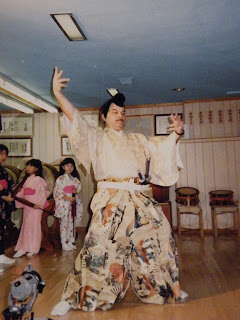 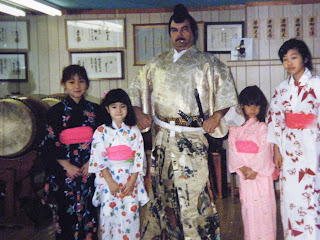 I could not believe what I was seeing, and decided to look up Nick Offerman's biography when I returned home. I found out that Nick Offerman was actually living in Chicago during the 1990's as Chicago is a mecca for American comedians. With this new information I could not help but think that this could be Nick Offerman himself. I've decided to send Nick Offerman and Amy Poehler these photos to discover if he had some relationship with the Japanese American community during the 90's or if this is simply a doppelganger. Nonetheless, I am sure that they will be as amused with these photos as I was.


Although work at the archive can sometimes be less than exciting, odd discoveries like these add a new element to our experience. The historically significant and stunning photos that we come across are always stimulating and we are honored to be in the presence of such objects. We also are happy to find strange discoveries like this one, reminding us that no matter how heavy some of the subject matter at the archive might be, these objects are all the products of real lives and real people. And no life is complete without some goofy fun.
Posted by Unknown at 7:06 PM